You can’t truly understand the tolls of foodservice unless you’ve worked in it. It’s as simple as that.

From long shifts with no breaks to the meagre pay packets, the life of a hospitality professional can certainly be a struggle at times. Which is a shame, because at the best of times the workplace is a vibrant, upbeat breeding ground for awesome people. But with the good, we must acknowledge the ugly side of foodservice. Only through addressing the issues can we start moving past them.

Mental health and suicide crisis continue to plague the industry and everyone from world renowned chefs to everyday members of the community are hurting. Chefs across the country are making leaps in addressing the problem, many of whom are choosing to speak out against the negative stigma associated to mental illness. Organisations, services and social networks tailored to hospitality specifically are being created to aid and support workers. There’s still a long way before the problems are all solved, but here’s some things to consider if you’re wanting to sustain strong physical and mental health:

Isn’t it ironic that many chefs have poor diets? In an ideal world a chef would arrive home at a reasonable hour and whip up something wholesome for themselves. Sadly, this is not the reality, with long hours of cooking and late nights often hurting a chefs motivation to create something for themselves. However your diet and mood have a very strong connection, and Headspace encouraged hydration and a healthy diet as a means to better your wellbeing.

If you often can’t be bothered cooking after your shift (understandable) try setting aside a couple of hours each week to prep meals. You’ll save time cooking in larger quantities and have it all good-to-go when you get back from work. The chances are you’ll have your food defrosted before you’ve found something to watch on Netflix.

2. Try and make the hours work

One of the major challenges with working in hospo, is finding a healthy sleep cycle. With your shifts moving about more often than a staircase at Hogwarts, your body can have a hard time adjusting. You could compare the feeling to being constantly jet-lagged, as your body battles to understand whether it should be awake or asleep. Best practice is to have a consistent sleep schedule. Try to find a window of 8 hours where any possible shifts wouldn’t interfere. If you’re up at the crack of dawn no matter what, you could try napping. Sleepio.com has suggested a long nap of up to 3 hours before work can reduce sleepiness for people working night shifts.

There’s nothing wrong with a couple of social beers to mark making it through a shift, but like all things in life over-indulgence can bring about negative consequences. Understanding the physical and mental effects associated with alcohol abuse is a great first step and a willingness to drink in moderation can work wonders for your wellbeing.

For foodservice, many chefs have spoken out around their struggle with alcohol abuse such as Chef Amber Kaba “I’ve suffered with alcohol dependency to cope with the pressures of the industry, which I’ve survived through.” After over two years of sobriety she had her friend and mentor take his own life, after a battle with alcohol. This prompted Amber to create The White Jacket Effect.

The White Jacket Effect is a community-based initiative that aims to address life balance and a healthy relationship with alcohol for hospitality professionals. You can support the cause by purchasing a jacket as well. 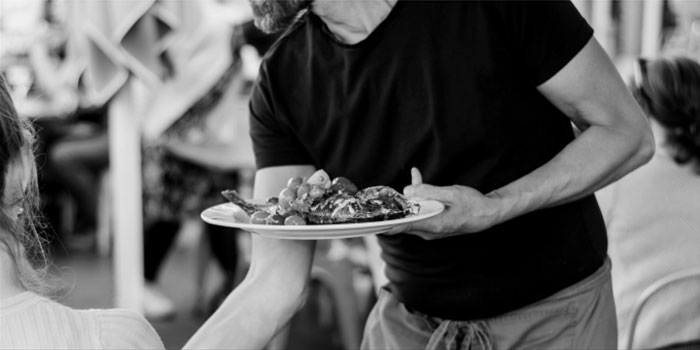 Unfortunately, sprinting from one side of the kitchen and back yelling “BEHIND!” doesn’t quite cut it in terms of regular exercise. So, it might be time to dust off your gym shorts. Beyond Blue has stated that there are many ways in which exercise positively influences your mental health.

On top of a general sense of self-accomplishment, the act of exercising releases feel-good chemicals in your brain, such as serotonin. If lifting weights or running in circles isn’t your thing, try thinking of what you enjoyed when you were a kid (when running around was actually fun). If you were a frequent tree climber, why not give rock climbing a go? Social activities such as this allow you to meet new people, have fun and all the while you’re getting fit!

If there’s anything that you need to take away from this article, it’s the importance of talking to each other. Chefs around the world have revealed that there’s this idea of ‘toughness’ and how it keeps chefs from speaking out about their problems. Celebrity Chef Matt Moran recently drew on his own experience in the industry.

“Fatigue probably was the biggest factor years ago, working 90, 100 hours a week, but we also had a sense of achievement by doing that,” he said.

“It was about how tough you can be, and how much work you can get done.”

Hospitality professionals should be commended for their toughness, as they endure almost every day with obstacles unrelatable to most. However, you should never suffer alone. Asking for help and support shouldn’t be a weakness in anyway, and what you’ll likely find is others who’re going through the same thing.

A survey conducted by R U OK? In 2018 revealed 80 per cent of hospitality workers were concerned about mental health issues like depression and anxiety. Finding ways to express yourself and encouraging others to do so is huge for combating suicide. Recently crowned I’m a Celeb winner and celebrity chef Miguel Mestre spoke on the importance of communication after winning the show.

‘We need to get away from the stigma. We have to stop Australians [who commit] suicide every day.”

The foodservice industry has dealt with mental health issues for some time now. Unsociable hours, bullying and the competitive, fast-paced environment are just some of the key reasons why we’re seeing problems. But with proactive organisations being formed and greater media coverage there’s hope that the industry is making improvements.

A positive work environment and fair wage is something your venue should be providing, but there’s so much incentive in taking appropriate care of yourself. By limiting and tending to the physical strains you’ll better position yourself to keep a healthy wellbeing. This means a balanced a diet, exercise and a routine sleep-cycle. It might sound like boring adult stuff, but if it helps you better enjoy the fun parts of foodservice, it’s genuinely worth it.

If you’re struggling maintaining a positive mental health or are suffering from a mental illness such as depression or anxiety – don’t be afraid to speak out. You know the burdens that a hospitality-centric lifestyle presents so it makes life easier when you understand there’s support out there. Talk to your work mates, bosses or family. Talk to your local 7/11 worker if you must, it’s better to communicate your battles rather than bottle them up.

If you want more information on the topics that we’ve presented or think that you might benefit from professional guidance, here’s a few links to helpful organisations:

Hi everyone! Firstly, I wanted

A night to remember…

Continued from my ‘Where it

For the last few months,

Need Help? Chat with us
Start a Conversation
Hi! Click one of our members below to chat on Whatsapp
The team typically replies in a few minutes.
Tim
How may I help you?